Heather Chunn, vice president of the YSU foundation, said the foundation was created in 1966 and is separate from the university.

“Our mission is to raise money to help support the students at YSU, so we raise funds that are either for direct impact to colleges or departments or to create an endowment. Those funds are invested and we’re able to reward from them over time,” Chunn said.

Tiffanie Thomas, scholarship coordinator at the foundation, said an endowment is an invested fund.

Thomas said once a scholarship is endowed it generates its own money and programmatic endowments are designed to support programs on campus.

“A lot of times the colleges have those to help with a guest speaker to come or starting new activities for students,” Thomas said.

Thomas said the scholarships are based on what the donor wishes to give.

“We have an annual giving coordinator who oversees our phone-a-thon [which engages] students and student organizations to raise money,” Chunn said. 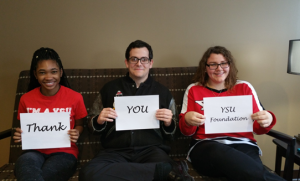 Chunn said the annual giving coordinator also sends out the annual solicitation tool to alumnus and donors asking them to continue their support for the university.

She said to establish an endowment, a minimum base of $10,000 is required.

Thomas said online applications have resulted in a large jump in students enrolling for scholarships with the YSU Foundation.

Chunn said students should also check within their college to see if additional scholarships that are not on the online application are available.

Chunn said the foundation has over 1,300 individual scholarships available to students.

Paul McFadden, president of the YSU foundation, said he focuses a lot on the external fundraising of the foundation.

McFadden said December is a strong month for the foundation to receive donations.

“People make their gifts at the end of the year, and I wish this was a typical month, but we’re off to a great month this year,” McFadden said.