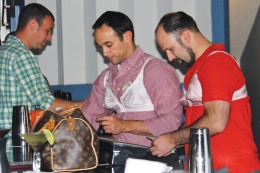 Some of downtown Youngstown’s bartenders stuffed their bras on Friday to raise money for Susan G. Komen for the Cure.

Youngstown Firefighters Union Local 312 sponsored the first Stuff the Bra Bar Crawl on Friday. They raised $2,380 by selling raffle tickets that bar hoppers were to get stamped at all eight of the participating venues.

“It’s catchy, and it means something,” said Courtney Kelly, the Youngstown firefighter who organized the event. “The whole point is to get the word out.”

Kelly joined the Youngstown Firefighters Union Local 312 in 2011. She organized the Bra Bar Crawl because the firefighters wanted to do something to raise funds for breast cancer research; she wanted to take the fundraising to another level.

She said she is waiting for more donations to come in, but will be donating around $5,000.

Last year, the Youngstown firefighters sold T-shirts to raise money for breast cancer, but Tracey Wright, the captain of Firefighters Union Local 312, said she wanted a way to get more of the public involved.

“As firefighters, we generally do try to participate in the community,” Wright said. “This is a good way for us to get out there and get involved.”

Wright spent the majority of the night collecting donations and selling tickets at O’Donold’s Irish Pub.

“I wanted to make sure I offered my assistance in any way,” she said.

Several bartenders wore bras on the outside of their shirts, and customers responded by stuffing donations into them.

Bartenders at Imbibe Martini Bar decided to put in the extra effort.

Jeff Kurz, co-owner of Imbibe, said it was a fun way to raise money.

“I’m currently rocking a 42 C, so when the money gets to D-cup capacity, I have to empty it out,” Kurz said on Friday night.

Kurz said he planned to donate $100; he hoped to donate double that number in customer donations.

“Everyone has been good sports about it,” Kurz said.

Having lost family and friends to various types of cancer, Kurz jumped at the opportunity to help.

“Here at Imbibe, we used to have three owners, and one of them unfortunately passed away to cancer last year,” Kurz said.

He said his bar’s participation in the event was a no-brainer.

“Everyone has been touched by breast cancer in one way or another,” Kurz said.

“I’ve been stamping a lot of tickets tonight,” Carrabbia said.

Carrabbia said he has had family members who have had breast cancer, and it makes him feel good to see people willing to participate and donate to the cause.

Kelly said the Bra Bar Crawl was a success, and she hopes to turn the one-night event into a tradition.