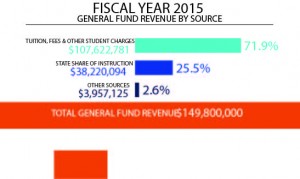 At Tuesday’s Finance and Facilities subcommittee meeting, Youngstown State University’s Board of Trustees accepted a $173 million operating budget for fiscal year 2015 — a move the full board is expected to approve on June 18.

This budget predicts a 3 percent decline in full-time equivalent student enrollments and a $669,000 reduction in state funds.

Harry Meshel was the only trustee to vote against the budget due to increased costs for students. He warned that an increase in tuition may negatively impact enrollment, which has fallen for the past three consecutive years.

“I think we need to do cutting before we do increasing. That has been my tone, and I think the board will come to that. I think we have raised enough money with tuition. I don’t care where we are competitively with others,” Meshel said. “Tuition is something we have to be very careful with, unless we increase enrollment so much that we can afford to pick up an extra dollar or two. We have to prove that the increase in money, how much ever it is, is going to be beneficial. I have told people for a long time that I won’t increase tuition to give people a pay raise.”

As noted, the equivalence of 43.5 full-time positions — that had been left vacant — were removed entirely. These positions were removed from the following divisions: three from the president’s division; 19.75 from finance and administration; 1.5 from university advancement; 17.75 from academic affairs; and 1.5 from student affairs.

With these positions removed, 15 upcoming lay offs, and additional rounds of lay offs expected later in the summer, there is likely to be considerable redistributing of employee responsibilities. Neal McNally, the vice president of finance and administration, said this would impact productivity.

“From the financial perspective, these are the kinds of things we need to do. From an operational stand point, there is going to be a price to pay in terms of productivity,” McNally said. “You can’t cut 43.5 positions from the budget and not expect there to be some negative impact on productivity.”

Meshel added that though he was not obstinately opposed to trimming faculty and staff, the process must be done with care.

“You have to be careful where you are cutting the meat, that is the old story. You can trim the fat but before you put it on the scale, don’t cut the meat off because you will lose money,” Meshel said. “I am the last one to find people losing job. … but there is a limit to how many people you need in certain positions because there is a way to spread the work out so that two can do the work of three. You don’t eliminate one in order to double up on another person, but you can eliminate one and have four people split up the work.”

The university predicted a general fund revenue shortfall of $10.8 million last year. Consequently, the six university divisions were asked to reduce expenses in an attempt to combat declining revenue.

By the end of this fiscal year, three of the six divisions will have met or exceeded their reduction target. Other divisions, however, fell short: intercollegiate athletics saved $150,000; student affairs saved $819,210; academic affairs saved $990,526 — just 25 percent, 79 percent and 13 percent of their respective saving goals.

These reductions brought the revenue shortfall from $10.8 million to $7.1 million. Meshel expressed dissatisfaction with these numbers.

“We need to cut more. We have to get closer to a balance because we only cut a third of what we should have. If you have got a $10 million cut required and you only cut three, you aren’t home yet,” Meshel said.

Teri Riley, interim provost and associate provost for academic administration, told the Board that if the cuts required of academic affairs were made immediately, it would be the equivalent of cutting 65 faculty members.

“Academic affairs has done base reductions for the past at least three years,” she said. “To eliminate that deficit that we have remaining, that is the equivalent of about 65 faculty positions that would need to be eliminated, which means eliminating a college. I mean that is how drastic it has to be to do this immediately.”

Riley clarified that academic affairs simply cannot meet this target within the next fiscal year. Instead, they will begin to implement long-term procedural changes.

“It certainly can not be done immediately, and what I was trying to do with my remarks to the Board was to illustrate the drastic changes we would have to make to meet that target,” Riley said. “What the Board is going to expect academic affairs to do over this fiscal year is to identify plans, identify strategies, that we can implement that will help us make that target.”

Riley added that keeping the integrity of academic programs is of utmost importance.

“It’s essential for academic affairs that we are maintaining the integrity of our programs and making sure that students get the courses they need in order to graduate in a timely manner,” she said.