By Jordan Unger And Laura Mcdonough

With the arrival of October, a taste for horror-themed attractions looms in the air. For Paul Patterson, monster designer and owner of Steel Valley Nightmare and Escape, orchestrating fear and entertainment through these attractions is a year-round job.

Steel Valley Nightmare and Escape is a horror escape room in Girard, Ohio that opened in August. Paul Patterson said his passion for making monsters and sets came from his childhood when he started painting and designing masks. 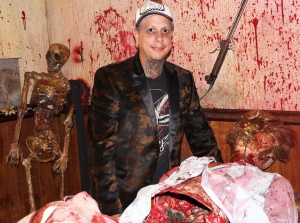 “Everything that I do tends to lean toward the dark side,” Paul Patterson said. “I have a hard time drawing pretty things.”

He found an outlet through making monsters and selling them to other horror-themed attractions. Although commonly viewed as seasonal entertainment, Paul Patterson said he started meeting buyers in November and December for upcoming seasons.

“From that point, you have from January to July to get [the requested project] done. By the time you get all that done, it’s time for Halloween, Thanksgiving comes and you’re back on it again,” Paul Patterson said.

In order to spend more time with his wife and five kids, he decided to settle down and start his own facility, which became the Steel Valley Nightmare and Escape.

Paul Patterson works with his brother, Matt Patterson, to conceptualize storylines and build sets for the escape room, which includes puzzles, animatronics and costumed actors. Matt Patterson, who is also the lab manager at Kersey Valley Spookywoods in North Carolina, said a lot of imagination and time goes into this work.

“Not all escape rooms go with that horror theme. A lot of them can be like … a spy room where you’re in an office or you have to do a bunch of math equations,” Matt Patterson said. “I think both of us really wanted this to be more hands-on, intense and in-your-face than the average escape room.”

The escape room will change themes periodically to keep fresh for customers, Paul Patterson said. The current season sends up to eight players into the home of a serial killer, where players must find their way out of the rooms within an hour by solving puzzles.

Players choose from three difficulty levels before they start the room: easy allows the answer to three puzzles, medium allows hints to three puzzles and hard offers no help.

Matt Patterson said a common misconception is that escape rooms are comparable to a haunted house.

“It’s more like you’re inside of a movie set living out that horror movie that you love to watch. It’s very interactive,” Matt Patterson said.

So far, Paul Patterson said he has only received positive responses from guests.

“I’ve had one customer come three times,” he said.

The rooms have multiple puzzles for guests to solve, which Paul Patterson said he changes out so returning guests can have different experiences each time.

Games will be $13 all day on Friday, Oct. 13. Paul Patterson said this will be different than the usual game, dedicated to the more intense players who want to push the boundaries.

“This is where we are really going to get into the smells, the taste of things and it’s more like playing ‘Fear Factor’ but making it a game,” Paul Patterson said.

If someone is interested in the monster-making business, Paul Patterson said they need passion and practice.

“If you’re interested in it, you pursue it,” he said. “That’s how most of us get into it. We take apprenticeships, we learn how to do these things and go from there with what it is we want to do with it.”

Paul Patterson hopes to expand the escape room with more complex puzzles as well as open a haunted house in the area. He said the most important thing to him is to entertain.

“My advice is just be prepared for anything and everything. You just never know what you’re going to run into in my rooms,” Paul Patterson said.

Steel Valley Nightmare and Escape is open Friday through Sunday. Tickets cost $25 dollars per person with a 20 percent discount offered to Youngstown State University students who show their student IDs at the desk.