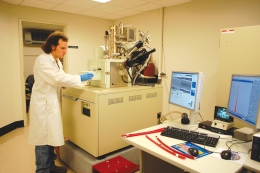 Since July, he has been doing hands-on research to replace the copper wires in car batteries with aluminum, but the collaboration between YSU and Delphi has been going on for approximately two years.

Hart, who studied physics at Clarion University of Pennsylvania, said the project is like nothing he has ever worked on before. He said he’s OK with the extra workload, though, because he enjoys what he’s doing.

“It sounds cliche, but I’m honored to be the one working on this project, as opposed to the others that wanted the position,” Hart said.

Hart is working closely with Virgil Solomon, assistant professor of mechanical engineering and lead researcher on the project.

“When I worked on a research project as an undergrad, I’d spend a few hours in the lab,” Hart said. “Working on this project, I’m in the lab or in class from 9 to 5 every day. The work went from a side project to a full-time job.”

Hart said the skills he learned in his coursework makes him better understand his research.

“Each piece of cable requires multiple, hourlong sample surveys of different sections of wire,” Solomon said. “This is not work that can be completed in one, two or three weeks.”

Solomon also stressed the importance of communication and teamwork in such a lengthy process.

For Hart, the real-life experience has been a learning process. Before he could begin research, he had to learn sample preparation and instrumentation in order to get accurate results and conclusions.

Solomon and Hart will be meeting in late September with their completed results for presentation on Friday.

Solomon said their research is right on schedule with what Delphi expects.