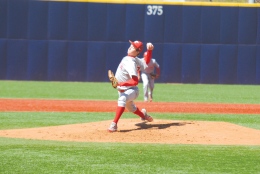 Junior Pat Shedlock delivers a pitch to a University of Pittsburgh batter on Wednesday. Shedlock allowed five earned runs, but the Penguins scored only one, falling to 4-23 for the season. Photo by Joe Catullo Jr./The Jambar.

Throughout this season, the Youngstown State University baseball team has struggled, winning a slim four games in 27 opportunities.

Head baseball coach Rich Pasquale said he tries to keep the team as motivated and energetic as possible.

“Take it each day,” Pasquale said. “Keep talking with the guys and teaching the guys, and you just got to keep going. We have a whole second half of the year left. That’s just how we keep doing it.”

“That’s all you can do right now is stay positive,” Marko said. “You just kind of tell them what they’re doing and take everything that is good.”

The Penguins attempted to stay positive on Wednesday against the University of Pittsburgh at Charles L. Cost Field.

The Panthers (14-12) slowly grew a comfortable lead, scoring a run in the first and third innings. Then, they got all the support necessary with a three-run fourth inning.

Pitt also scored three runs in the bottom of the eighth inning to put the nail in the coffin, defeating the Penguins, 9-1.

The Penguins (4-23) did not score their first run until the top of the sixth inning on sophomore Drew Dosch’s RBI infield single. He finished with two of the team’s six hits.

Sophomore Casey Roche started for the Panthers. He began the game with a 10.97 ERA in three appearances (two starts). He pitched six innings, allowed one run on five hits and struck out five batters.

Offensively, Pitt senior Rick Devereaux went 3-for-4 at the plate with a double and three RBIs.

Junior Pat Shedlock started for YSU and went through the first three innings with limited damage. However, he allowed three runs in the bottom

of the fourth. He lasted 3 1/3 innings, allowed five runs (all earned), seven hits and three walks, while striking out two batters.

A key element to the Penguins’ lineup, who is still battling a shoulder injury, is senior first baseman Jeremy Banks. The last time he played was on March 18, when he hit a walk-off RBI double in the bottom of the 11th inning against the University of Wisconsin-Milwaukee. The Penguins won, 4-3.

During the celebration, a teammate stepped on his shoulder. Pasquale said Banks is getting healthier; when he does return, he might bat leadoff.

Banks hit off the tee and ran drills on Tuesday.

“Hopefully, next week we can get him in there,” Pasquale said. “My plan is just to lead him off to get him as many plate appearances as he can. He has been seeing pitches [in the bullpen]. He just isn’t swinging yet.”

Another senior battling an injury is David Leon, who was the team’s starting second baseman last year. He played first base on Wednesday. Leon switched over to second base late in the game and went 1-4 at the plate, batting first in the lineup.

Wednesday marked the first of four straight games for the Penguins. They travel to begin a three-game series with Wright State University on Thursday.