Kevin Ball, associate provost of academic programs and planning, was awarded the President’s Leadership Merit Award and Appreciation for Leadership in the Higher Learning Commission Accreditation Process early this month.

He was awarded by President Jim Tressel along with the Youngstown State University Board of Trustees.

Ball said he is surprised and honored to have received the award and stressed that the process was a team effort.

“It was kind and thoughtful of the president to provide recognition of all the time and effort we put into this project … The award recognizes something that was above and beyond our normal duties,” he said.

Tressel said Ball did an “extraordinary job” at the Board of Trustees meeting on June 6.

Ball was a co-leader in the HLC Steering Committee along with Hillary Fuhrman, Joe Palardy, and Tysa Egleton.

“As associate provost for academic programs and planning, one of my responsibilities includes serving as the university’s accreditation liaison officer,” he said. “So, even though re-accreditation only occurs once every ten years, it made sense that I would be involved in the re-accreditation process.”

The HLC Steering Committee has five criteria for accreditation and divided the workload between two committee members, who were assigned to each criteria. They also had additional help.

Ball said the committee members charged with a criterion were responsible for their own sub-committees.

“You start to get an idea of how many people were involved,” he said. “It truly was a university-wide effort. And we tried to keep track of all the committees and subcommittees and a million individual requests for different offices.”

The HLC Steering Committee prepared for the process more than three years ago when the committee was first formed, according to Ball. 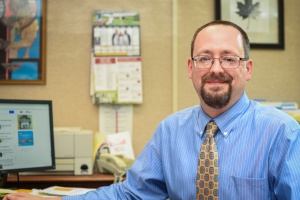 He said there was great effort in making the committee as representative of the university as possible including deans, chairs, faculty and staff all serving on the committee.

Ball said one of his favorite moments of the process was when approximately 150 administrators, faculty, staff and students showed up to the first open forum.

He said the experience reminded him that many people care deeply about the university.

“I know that the open forums, which were all heavily-attended, made a significant impression on the review team members,” Ball said. “They even commented during our exit interview about the impressive participation across campus. So, that was rewarding to see how committed everyone was to the success of YSU.”

Joseph Palardy, who served on the HLC executive committee and the steering committee, said in addition to Ball’s hours with the HLC, he has worked on other projects including YSU’s new electronic catalog.

“These projects are in addition to his routine duties and some additional duties he took on while the other associate provost position was vacant,” Palardy said. “I can’t think of anyone more deserving of the award. Kevin is one of the first people on campus every day and one of the last people to leave.”

Hillary Fuhrman, HLC coordinating team member, said Ball greatly deserves recognition for his tireless work to plan and prepare for the visit, as well as prepare both campus leadership and the campus community for our re-accreditation process.

“Our successful visit would not have happened without his contributions,” Fuhrman said.