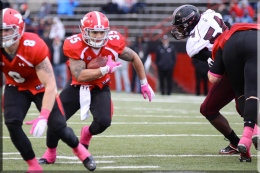 Jamaine Cook rushes the ball in YSU’s loss to Southern Illinois University on Saturday. The Penguins are looking to bounce back when they travel to South Dakota State University this weekend. Photo by Dustin Livesay/The Jambar.

While the Football Championship Subdivision playoffs begin on Nov. 24, the Youngstown State University football team will start its own “playoffs” slightly earlier.

Holding a 4-3 record — including 1-3 in the Missouri Valley Football Conference — the Penguins will approach Saturday’s matchup at South Dakota State University with a do-or-die attitude.

“This is a playoff game; I guess you can say it’s Week 1 of the playoffs,” safety Donald D’Alesio said. “We know we probably can’t afford to lose another game.”

An 8-3 record would guarantee YSU a playoff spot, while any lesser record would make it difficult for the Penguins to qualify.

“It would depend on who you beat and who you didn’t [beat] and strength of schedule,” said head football coach Eric Wolford. “If we want to get in, this is a playoff game.”

In South Dakota, the Penguins will visit a playoff-quality team. The Jackrabbits are 5-2 overall and 3-1 in the conference. SDSU has also defeated YSU in each of the past two seasons.

“We want to get back at ‘em a little bit,” D’Alesio said. “We can use that as a chip on our shoulder to try and go there and knock them off.”

It will be no small feat for the Penguins, as SDSU has already sold approximately 15,000 tickets for a stadium that seats only about 10,000.

Although the Penguins are excited to test SDSU, it’s safe to say YSU is eager to end the month of October.

So far this month, opponents have outscored the Penguins 121-56. Meanwhile, YSU committed eight turnovers in 12 quarters, five of those coming last week against Southern Illinois University.

“In October, going back, you look at the turnovers,” Wolford said. “That’s something that we have not been doing for the most part since I’ve been here.”

In addition, the Penguins haven’t been scoring in the second half. In each of their three losses, they’ve been shut out in the final two quarters.

It’s a glaring problem, and Wolford and his staff are still searching for the answer to their second-half woes.

“That’s the magic question,” Wolford said. “Specifically, it’s a lack of execution. I can’t put it any simpler than that. We’ve got the plays. We’ve got to execute them.”

One positive from the SIU loss was the performance from the YSU defense. They allowed only 17 points on 256 total yards and forced four three-and-outs.

“We simplified things a little bit, and that made it a lot easier for us,” linebacker Ali Cheaib said. “I think we played well.”

Seeing the defensive improvements from simplifying the playbook, Wolford said he’ll take the same approach this week with the offense.

But a greater concern for the Penguins is to put strong performances from the offense, defense and special teams together — something they haven’t been able to do.

“I don’t think anything is more frustrating than that because we have the talent,” Cheaib said. “We gotta bite down and find a way to get everything done.”