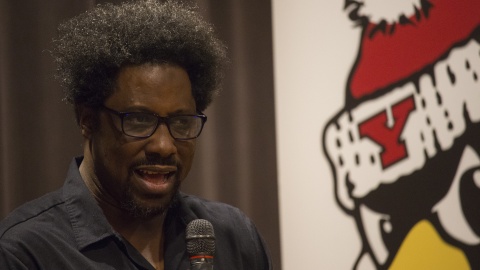 The speech was presented by the Centofanti Symposium, and beforehand Bell spoke with journalism and communication students, as well as several students training to become police officers.

“My schedule says an informal talk, and now I’m behind a podium talking to a bunch of cops,” Bell joked. “I need to talk to my agent.”

Bell asked if anyone had been to his hometown of Berkeley, California, and after no hands went up he said he didn’t think so, because he saw a Trump sign on the way in.

When asked about the controversy created by Colin Kaepernick refusing to stand for the national anthem to protest violence against black Americans by the police, he said black people that want to express their displeasure are in a lose-lose situation.

A lot of the conversation revolved around race relations in America and particularly the relationship between black Americans and the police.

It’s going to take a lot of awkward conversations for things to get better, Bell said, and we can’t avoid those conversations.

Bell talked about an episode of “The United Shades of America,” his CNN show, where he met with members of the Ku Klux Klan.

He said they seemed more human when the cameras were off, and he got the impression that they were unhappy with their place in the world and needed someone to blame. Though he joked that black people were an odd target for people living in rural Kentucky.

“There aren’t enough black people in this town for you to be afraid of black people,” Bell said. “The Klan doesn’t crop up in Harlem.”

In regards to the relationship between black people and the police, he suggested that a return to community policing where police know the people in the neighborhood, and those people also know the police officers would help.

“I think there’s a sense in which police officers see themselves as separate from the community,” Bell said. “It’s your job to rebuild that relationship.”

While race relations in America have experienced a lot of ups and downs, Bell said he’s still hopeful about the country’s future.

“Over an infinite timeline, America gets better,” Bell said.