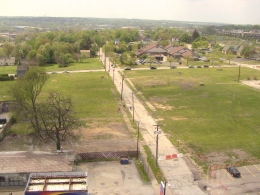 A new softball field will be built on the left side, behind McDonald’s, and a soccer/intramural field to the right. The blueprints for these facilities are planned to be drawn in the summer. Photo by Joe Catullo Jr./The Jambar.

This past fall, the $12.3 million Watson and Tressel Training Site was installed, opening many new opportunities for the football, baseball, softball, and track and field teams.

But that wasn’t enough.

YSU is in the planning stages of two, possibly three, new facilities on campus for soccer, softball and intramural sports, with promising potential for tennis.

“It will help our programs a lot in the sense of having those new types of facilities on our campus,” said Ron Strollo, executive director of intercollegiate athletics at YSU. “We’re a Division I program. Unfortunately, most high schools have a softball field and a soccer field.”

The first priority of the project is a soccer/intramural field that Strollo said would include lights.

“Its main use is going to be for campus rec and intramurals because, obviously, when we built the indoor facility, we took away a grass field there,” he said.

Strollo added that the soccer team needs a new home. The team plays its home games at Stambaugh Stadium, where the field is not as wide as a standard soccer field, and Stambaugh’s Beede Field is not a level playing surface.

“There’s a need for us to have a true soccer field that’s flat and a lot wider,” Strollo said. “Our soccer team would be able to utilize it for competition, but that will be a very small percentage of the usage. It will mostly be used for campus rec and intramurals.”

“The biggest advantage will be when they build these fields that we’ll have more green space to add to our programs so that our college students will have more opportunities to play outdoor activities,” Conroy said.

The new soccer field will be next to the Madison Avenue Expressway and behind Sunoco on Fifth Avenue.

“I think that once you get accustomed to the field that you’re on, it will give you advantages playing there,” said Jamie Hall, assistant sports information director at YSU. “It gives us more versatility in our department as a university.”

Hall added that scheduling for practices around the players’ school schedules will be easier. This year, Will Lemke, head soccer coach, said he could sometimes schedule practices for only 6 a.m. at Stambaugh Stadium.

“The difficulties can’t be overstated,” Lemke said. “For us to be able to go and have a consistent practice time really helps this organization, helps the team morale, helps us stay focused [and] makes it so much more efficient.”

The next priority would be a new softball stadium behind McDonald’s on Fifth Avenue.

The softball team has played at McCune Park in Canfield since 2003, a place Hall and Strollo said has treated YSU well.

“They’ve been an unbelievable partner for us,” Strollo said. “We’re very fortunate that we have that as an option.”

McCune Park is made up of nine fields, two of which have lights. The No. 4 field is where the Penguins play their home games.

According to Google Maps, 8.9 miles separate YSU from McCune Park, which makes for a 17-minute drive.

“I think any university wants to give their students more events to go to, to be more involved,” Hall said. “It gives us more things for our students to do to enhance their actual student experience.”

Hall added that a huge advantage to an on-campus softball field is video. The Penguins would be able to stream live games on the Horizon League’s website.

If all goes well, most of YSU’s sports will be able to compete on campus for home matches, but one sport may be left in the dust: baseball.

Strollo said enough land isn’t available to shoehorn a new baseball field, but, if they wanted to do that, they would eliminate all possibilities of building a soccer field.

And people at YSU, including Strollo, are pleased with Eastwood Field, home of the Penguins and the Mahoning Valley Scrappers. YSU pays nearly $15,000 to $20,000 a year to play at Eastwood.

“Although it’s not on campus, it’s an unbelievable venue for our student-athletes,” Strollo said. “It’s the nicest one in the conference. Although someday we would like to bring it back on campus, that’s a pretty good home for it right now.”

“I think there’s probably advantages and disadvantages recruitingwise because you’re giving up that big park feel versus having the on-campus field,” Vogel said. “Student turnout has been pretty good out in Niles. You might get a few more students over there, but they’ve done a good job of coming out.”

According to YSU Sports Information, the baseball team is averaging nearly 115 fans per game, with 14 games at Eastwood Field and one at Cene Park in Struthers as of Tuesday.

Rich Pasquale, YSU’s head baseball coach, said he likes coaching at Eastwood Field, though it would be nice to have an on-campus field.

“Obviously, it would be nice to involve our campus community to have a baseball field on campus or close to it,” Pasquale said. “But I think we have the next best thing at Eastwood Field.”

Besides new soccer and softball facilities, Strollo said that if the resources are available, YSU would like to relocate the tennis courts, which are located in between Stambaugh Stadium and the WATTS.

Mark Klysner, YSU’s men’s and women’s tennis coach, said the courts must be either fixed or removed.

“The last thing I heard was that we might be keeping the location, which I prefer,” Klysner said. “I like being in between the stadium and the WATTS. It’s closer to our locker rooms. It’s closer to my office, so that would be my preference, but any time you get the possibility of new courts, we’ll take that, too.”

With tennis courts as a third option at YSU, the soccer and softball fields could be blueprinted as early as this summer.

“It’s one thing to dream, but it’s a whole other thing to figure out what you really have there as far as resources to invest,” Strollo said. “I’m excited about being able to get fields, but I’m probably more excited about cleaning up some areas.”