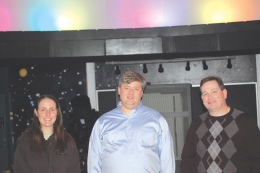 “Cosmic Castaways,” a planetarium show created and produced at Youngstown State University, was first released in May, but John Feldmeier, an associate professor of physics and astronomy, is already raising money for another film.

On Thursday, Feldmeier and his colleagues will play host to past donors, including faculty; staff; supporters of the YSU College of Science, Technology, Engineering and Mathematics; and local amateur astronomers.

The event consists of a reception in Maag Library, followed by speeches and a prescreening of “Cosmic Castaways” in the Ward Beecher Hall planetarium before the film’s official release on Friday.

“Cosmic Castaways” focuses on research by YSU astronomy professors on stars between galaxies; it was a national collaboration between YSU, Case Western Reserve University and Southern Illinois University Edwardsville.

Curtis Spivey and Annie Wilson, who both work in the planetarium, edited and improved the show. Feldmeier said about one-third of the show is new or improved from the original rough draft.

“There were some scenes that we just kind of used as a placeholder,” Spivey said.

They made the scenes more stunning and internally consistent, and also improved opening and closing scenes.

The fundraiser will be accented by a new lighting system in the YSU planetarium.

All the money raised will be used to fund the next planetarium show Feldmeier and his team hope to create.

The team who worked on “Cosmic Castaways” is tossing around three ideas for the next show. They are considering producing a show about asteroids, distant galaxies or John Wheeler, a world-renowned physicist who hailed from Youngstown and coined the term “black hole.”

“Which show we’ll do first is which show we get funding for first,” Feldmeier said.

Of all the ideas, Feldmeier is leaning toward a planetarium show about Wheeler, which would involve partnering with YSU’s history department.

Feldmeier said if this fundraiser doesn’t provide all of the funding needed for the next show, he and his collaborators would begin looking at other ways to raise funds.

“This is kind of like fishing. You stick your hook in the water and see what happens,” Feldmeier said.

“Cosmic Castaways” took 18 months to produce, but Spivey said the experience has given them enough experience that the next project will take less time.

“Possibilities are endless once we get going on this,” Spivey said. “We know what we’re doing now. It should take a lot less time.”

Feldmeier said he hopes to translate the shows they produce into foreign languages in the future and will continue to make them free for other planetariums.

Planetariums can download the file for the show from a file-hosting site called CosmoQuest, which is the brainchild of Pamela Gay, the voice of “Comic Castaways.”

The YouTube version of “Cosmic Castaways” will be available before the year’s end.