The late Henry Ford famously said in his 1922 autobiography “My Life and Work,” “Failure is simply the opportunity to begin again, this time more intelligently.”

Eric Ostrander, a senior graphic and interactive design art student on his third time around at Youngstown State University, would definitely agree.

“After coming back this final time, my focus is way stronger now than it was from when I started,” Ostrander said.

Being undecided the first time around and running into a few life hurdles and roadblocks during his second try at YSU, Ostrander decided he had to finally finish what he started. He returned to YSU back in 2012.

At age 28, Ostrander is the eldest of three siblings and is the first to attend YSU; he expects to graduate fall of 2015. He said his artistic talent might be derived from his mother, who is also a talented painter.

“I remember her repainting statues at home and she would paint our faces for Halloween when we were younger,” he said. “She’s a perfectionist when it comes to things like that.”

At YSU, Ostrander still demonstrates his commitment to art by maintaining Dean’s List, as well as President’s List, awards since his return. He is also president of the American Institute of Graphic Arts organization, which allows him to share his work and network.

“I knew I was going to do something with art because it’s my passion,” Ostrander said.

He sits on the board of advisers at Columbiana County Career & Tech Center in Lisbon, offering feedback and helping students with capstone projects. He also helps incoming YSU freshmen and sophomores get acclimated to the art program.

He is eager to make connections, and he keeps those connections, which allows him to stand out among the other artists in the department. It’s that same eagerness that his professor Michelle Nelson said allows him to have an edge on the competition. She spoke highly of Ostrander.

“He’s a genuine person; he’s articulate, and that’s not something that comes naturally. A lot of art students are shy, but he presents himself in a clear way,” she said. “With students here, you a lot of times get creative and talented but you don’t get involved, and he is very involved.”

Ostrander’s pride and excitement for his art is immediately apparent. He finds his muse in music or just letting go and the ideas just seem to flow. He said the most exciting part for him seems to be learning new things and turning a client’s vision into reality.

Ostrander does some freelance work for a local church in his free time, as well as Broadband Hospitality, a company that provides TV and internet for the hospitality industryLA_Postcards 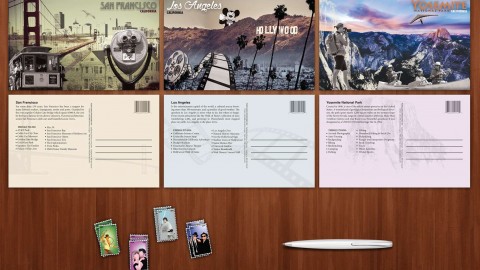 . After his fall 2015 graduation, he has the opportunity to work with another YSU graduate in Nashville, Tennessee who has worked with country music stars like Taylor Swift and Lady Antebellum, but he said he is keeping his options open.