Blank, a community art instillation, was held Friday at the SOAP Art Gallery to gather the community and allow them to express themselves through painting. Fifty empty canvases were available for anyone who wanted their painting up on the gallery wall.

By the end of the night, nearly every canvas had been used. The owner of the SOAP, Stephen Poullas, said this is the first event he ever held like this. He wanted the event to lead people to adopt art-making more frequently in their lives. 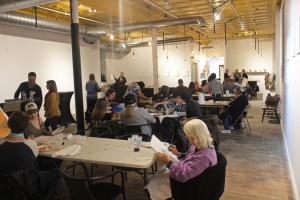 “This is a much more hands-on experience with art as opposed to going to a museum and just looking,” Stephen Poullas said. “This event fosters a more interactive approach to art.”

Stephen Poullas said the Blank instillation helped participants better understand and appreciate art in any gallery. He said the hands-on approach is a great way to put someone in the shoes of an artist.

Courtney Poullas, Stephen Poullas’ wife, came up with the idea for the event. She said she wanted to give the community a chance to be more involved with an art form and thought it would help remove any nervousness of creating art. Some people are intimidated by the art process, she said.

Daniel Rauschenbach, an owner of the gallery, said what he found enjoyable about the event was how all the participants coexisted with each other and came from different backgrounds.

“There are eight professional artists painting tonight and it would be hard to tell who they are just by looking at the crowd,” Rauschenbach said.

Rauschenbach said he also enjoyed the interaction within the crowd. He said as the paintings developed, people began walking around, giving positive feedback on others art work.

Stephen Poullas said an event like this can show that different styles of a community and a single task, in this case painting, can be approached in a variety of ways. He said it benefits participants in short term by giving them a healthy, fun night of painting.

Since the gallery opened, one of its main goals has been to keep art relevant and accessible. Courtney Polls said fulfilling that goal is important because of the impact it can have on people’s lives.

“Engaging in art can be a very powerful experience,” Courtney Poullas said. “Art has the ability to change a person’s life.”

The artwork will remain on display through November and will then be given back to the painter who participated. The gallery’s next event is on Nov. 18, titled “Handmade.”