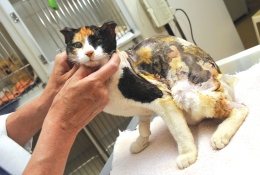 An animal rights gathering scheduled for this Saturday will be not only a demonstration but also a celebration.

On Wednesday, House Bill 108 for Nitro’s Law passed through the Ohio House of Representatives, increasing the animal cruelty penalties in Ohio from a misdemeanor to a felony.

The bill will now make its way to the Senate.

The recent House Bill vote encouraged Youngstown State University student Nova Sanguinetti to organize a demonstration for people to raise awareness for future votes and to celebrate their advancement.

On Saturday, local animal supporters plan to gather at the corner of Market Street and state Route 224.

“There are going to be a lot of tears of joy, a lot of happy people. Now we’re just letting people know that we were heard,” Sanguinetti said. “Your message and your voice will be heard; it just comes down to being diligent.”

A page created on Facebook for the event has already had 715 positive responses from people who want to attend. Sanguinetti said she hopes to organize a group that will travel and fight for the cause.

Sanguinetti said the people she talks to are worried about their pets, and that, for many, pets are not considered animals, but as a part of the family. She wants to organize more community watches to increase progress.

“People are either heartbroken, pissed off or both. They want to be heard and want to be recognized. Our representatives have to hear us,” Sanguinetti said.

Within the past month in Youngstown, two German Shepherd puppies were found strangled, two dogs were stolen and thrown over a bridge onto Interstate 680, a pit bull mix was found dead in a trash heap and a Labrador Retriever mix was found with its leg and part of its tail cut off.

To many concerned residents, Ohio’s punishment laws for the first offense of animal abuse were less than sufficient.

“I looked into the Nitro laws, and I saw that the penalties for animal abuse are less than if someone had one joint on them,” said animal activist Katelyn Bowden. “It’s little to no penalty. Maybe 30 days in prison.”

Current animal cruelty penalties in Ohio range from a minor misdemeanor to a first-degree misdemeanor, while the most costly penalty enforced if the animal is killed or injured is worth $300 or more, according to Ohio Revised Code.

The decision to pass the bill on to the Senate, however, acts as a double-edged sword for some.

“I just kind of calmed down. It’s been a rough day, but of course it’s very hard. My dog suffered and died, so while I’m happy, it’s bittersweet,” said Elizabeth Raad, the founder of Nitro Foundation

In 2009, Nitro’s Law was introduced after Raad encountered a devastating issue at High Caliber K9, a dog daycare and obedience school in Youngstown. Raad left her dog, Nitro, at the facility while tending to a family crisis.

Raad said she would call the facility a few times a week to check on her dog, and during one phone call, she was told that Nitro was excelling and that she and her husband could even extend the dog’s stay.

“We were told to leave him for another week or two and that he was doing great,” Raad said. “When he told us that, Nitro was already dead. This is definitely not an accident; you don’t starve to death overnight.”

Seven dogs were found dead and 12 were found starving in the facility after a police investigation.

Steve Croley, the owner of the facility, was sentenced to four months in jail on four counts of animal cruelty and neglect.

Raad said that while the votes were coming in, she was “hysterically crying” because she was proud that her efforts came to fruition as the bill passed through the Ohio House.

“A lot of people have really stepped up to the plate, went door to door, passing out fliers. This is 100 percent a grass-root effort,” Raad said.

Younger people are becoming increasingly passionate about combating the abuse of animals in the area and are elated with the news of Nitro Foundation’s progress.

Sanguinetti watched live coverage of the decision and recalled all of the work the group has done up to this point.

“It’s kind of ridiculous, but as I was watching it, I just began crying. I couldn’t believe that it was finally there and on the floor,” she said. “When I saw how many people voted ‘yea’ for it, it warmed my heart. I just felt a great sense of accomplishment that all of these calls we made and letters we have written aren’t in vain.”

Years ago, Sanguinetti found a stray cat in the woods behind her grandparents’ house. Not long after, she took in the stray and found that its neck had been slit with fishing wire, as though someone had tried to hang it.

Another one of her past pet cats, she said, was poisoned.

After experiencing these — and multiple other — cases of animal abuse, Sanguinetti became a fervent supporter of Nitro’s Law and its components.

“When I had heard about what had happened to Nitro, it completely broke my heart, especially because it was someone who was supposed to be trusted,” Sanguinetti said. “When you leave your animal with a professional, you expect them to be safe.”