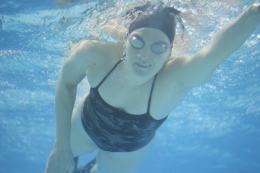 Sophomore Megan Ciampa practices for the final time in Beeghly Center on Monday. The swimming and diving team departed shortly after to take part in the Horizon League Championship in Milwaukee. Photo by Dustin Livesay/The Jambar.

For most Youngstown State University teams, the ultimate goal is to win the Horizon League Championship.

The swimming and diving teams have a different goal: beat the University of Illinois at Chicago.

“The goal to beat UIC has been there all year,” head coach Matt Anderson said. “They were directly ahead of us last year. We were actually ahead of them after the first day last year.”

The swimming team has its sights set on fourth place.

Anderson said it is not higher because swimming is different from other sports.

“It’s not like a basketball game where it’s a matter of how the ball bounces in,” Anderson said. “For us, we can pretty much look at our times and see where every single kid is going to place.”

Anderson said the HL favorite is Cleveland State University. He added that the Vikings need to have a terrible meet in order for the Penguins to finish above them.

“I wouldn’t necessarily say that they have faster swimmers, because we’re pretty good, too,” Nishani Cicilson said. “We have a big team this year, a really good team. It’s mainly just sticking through the four days.”

One of Cicilson’s goals is to break the school record of 23.82 seconds in the 50-yard freestyle preliminaries that she set in 2010.

“Individually speaking, we can see a lot of school records falling,” Anderson said. “I think everybody on the team is ready to swim fast times. Cicilson has a very good chance of breaking her school record in the 50.”

Cicilson is one of four seniors competing in their final collegiate meet, and freshman Ashley Dow is getting her first look.

“I’ve looked at the times to know where I have to go,” Dow said. “I would like to be in the top eight.”

Dow won HL Player of the Week for the week of Jan. 16-22. She won two of three individual events at the Butler Invitational.

The diving team has another mindset because it is more of an individual sport, said junior diver Casey Hill.

“We’re always striving to help the team, but our scores are done a little differently,” Hill said. “As a team, we’re aiming to help them no matter what.”

Hill is looking to duplicate her performance from last year’s meet, winning in the three-meter dive with a score of 284.20 points. She also finished sixth in the one-meter dive, scoring 232.415 points.

“We’re hoping that she can repeat that this year,” said diving coach Nick Gavolas. “I’m looking to put everybody in the top 12, which would be huge. We haven’t done that for, like, seven years, so I’m looking forward to this meet.”

Hill and Gavolas said the team’s experience is vital. No freshmen or seniors are on the team.

“From an individual’s perspective, they’ve got a year under their belt, and they know the competition,” Gavolas said. “They’re not going to be as nervous, which showed on the freshmen last year.”

In order for the swimmers and divers to have a good meet, they must peak at the right time, and Anderson said it is showing.

“In swimming, more than any other sport, the idea of peaking at the right time is huge,” Anderson said. “We’re really looking forward to see what they can do now that they’ve had some rest. We’re already seeing it in practice