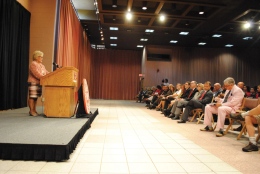 YSU President Cynthia Anderson delivers the State of the University address on Monday in the Chestnut Room of Kilcawley Center. Photo by Chris Cotelesse/The Jambar.

Expecting a decline in enrollment this fall semester, Youngstown State University President Cynthia Anderson made it a point to discuss revenue during her State of the University address on Monday.

A 1 percent decline would equate to a $1 million revenue loss. Complicating YSU’s financial difficulties are a decrease in state funds and $78 million in bonds sold to build and renovate campus property.

The Ohio Board of Regents downgraded YSU’s fiscal rating last year in part because of the $4 million missed by an enrollment decline in the fall of 2011. Another significant drop could further lower YSU’s rating.

“We will have to be a leaner university,” Anderson said after the speech.

She said 100 staff positions left vacant after an early retirement buyout in the summer of 2011 will save the university money. Budget director Neal McNally set aside $1 million in a contingency fund to counter a 1 percent enrollment decline, but Anderson said the administration would still have to raise funds this year.

“I don’t think that there is just one initiative that’s going to counter any shortfall. We will have to make some additional decisions,” she said.

As opportunities in shale exploration open up in the Mahoning Valley, Anderson said some traditional college-aged individuals might find the minimal training a more attractive option than a four-year education.

YSU’s general fund has increasingly relied on tuition and enrollment in recent years as state funding continues to decline.

For students, it means increases in tuition and fees, but the funding model forces administrators to focus on recruitment and retention to get those dollars.

She said her administration is working to solve the problems, but added that patience and persistence will be necessary to find appropriate funding.

“That’s the new norm for everyone, not just us,” she said.