The Federal Building in downtown Youngstown was alive with the sounds of beats, rhymes and positive lyrics on Feb. 4, showcasing two local hip-hop artists.

Styles sat comfortably, sipping a whiskey with an orange peel before the show, accompanied by his entourage. He spoke of creating memories for his fans, the kind he felt his father had passed on to him as a young man.

“My father was my personal inspiration, he listened to so many artists with no particular favoritism, and this inspired me [to] broaden my horizons for musical inspiration,” Styles said. 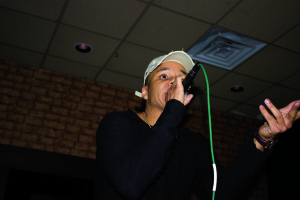 Styles went on to talk about having a 60-minute professional set instead of a 20-minute set, and how this helped him bring to fruition his creativity for the evening’s performance. His main credit was given to Penguin Productions in their abundance of support and advertisement from the previous weeks.

“You know, Penguin Productions has really treated me well, they even gave me water bottles and clean white towels for the performance,” Styles said.

Styles hinted that the idea behind his performance for this evening wasn’t just about him. It was the deep connection he felt to his fans and his desire to inspire them.

“When you’re chasing your dreams, don’t ever give up. Whenever you get knocked down, you get back up and keep working harder towards your dreams.” Styles said.

Fareed and his band expressed their excitement to open for Mike Styles.

“Hip Hop has been in disarray, and we are bringing back the substance of Hip Hop,” Fareed said.

Fareed’s growing local popularity with the community has grown since the release of his newest album, “SJ: The Revolution.” Fareed talked about his growing experience and his connection to his fans.

“It’s important to be honest and uplift everyone who hears our music,” Fareed said. “I am really grateful of Penguin Productions, and this opportunity to open for Mike Styles. It’s a very humbling experience.”

Speaking on his musical inspiration, Fareed cited the ‘70s and ‘60s funk groups Parliament Funkadelic and Earth, Wind & Fire. But on the subject of his personal motivators, he said that would be his grandfather.

“My grandfather was a business owner, and he taught me a lot about integrity,” Fareed said.

As the shows started, the Federal and Penguin Productions staffs were very accommodating and beneficial socially to the artists. Amidst the changing lights at the foot of the stage was Penguin Productions’ Mollie Crowe, a photographer and coordinator for last year’s Federal Frenzy.

“I love what I do,” Crowe said. “Mike is a really humble and laid back guy.”

Penguin Productions next event in their artist series is Tennessee rockers Behold the Brave with Figurehead at The SOAP Gallery on Feb. 25.