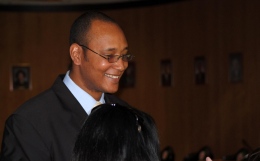 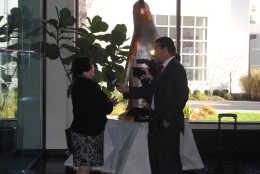 Members of TV Marti conduct an impromptu Spanish language interview after being removed from the Board of Trustees Meeting Room by Youngstown Police officers. Photo by Chad Travers/ The Jambar

Bolanos has served as chief of the Cuban Interests Section of the Swiss Embassy in Washington since 2007.

On this his first tour of the United States, Bolanos spent several days in Columbus visiting with Ohio’s Lt. Governor, the mayor of Columbus and Ohio State University’s president, before traveling to Youngstown.

The ambassador spoke to a group of YSU political science students on Friday morning and was scheduled to give a lecture on U.S.-Cuba relations, but was called to Washington before he was able to present his lecture.

Rodney Gonzales, 3rd Secretary of the Cuban Interests Section and member of the ambassador’s staff spoke in his absence.

Gonzales characterized himself as a member of the new generation of Cuban diplomats and as new revolutionaries delivering Cuba’s message to the United States and the world.

He provided a Cuban perspective on the strained relationship between the United States and Cuba.

The embargo against Cuba by United States economic sanctions began during the Kennedy administration after Cuba nationalized various U.S. properties and corporations operating on the island.

The embargo was further codified into law with the passage of the Cuban Democracy Act in 1992, which prohibited foreign subsidiaries of U.S. corporations from trading with Cuba and blocked all travel to the island by U.S. citizens.

Gonzales said that hundreds of billions of dollars in revenue for both countries have been lost to the lack of trade between Cuba and the United States.

He said he believes that millions of Americans would visit Cuba if the embargo was lifted, providing thousands of new jobs for the Cuban people.

Gonzales highlighted Cuba’s long program of international relations, explaining that the United States is virtually the only nation that Cuba has a problem dealing with.

Cuba has diplomatic relations with 187 other countries, he said.

“Thirty six countries around the world receive aid in some form from Cuba, [and] 187 out of 192 countries in the United Nations voted against the U.S. embargo. This is an issue that touches peoples’ hearts. We ask ‘what has it been good for,'” he said.

But Gonzales contends that the Cuban people do not harbor any ill will toward the American people because of the embargo.

“If there is a respectful dialogue between us, we can be good neighbors,” Gonzales said.

After answering several questions from students and faculty, the secretary was immediately and aggressively approached by a camera crew from TV Marti, a television station based in Miami, Florida.

The secretary refused to speak with the interviewer before members of YSU’s political science department asked Youngstown Police to remove the camera crew from the room.