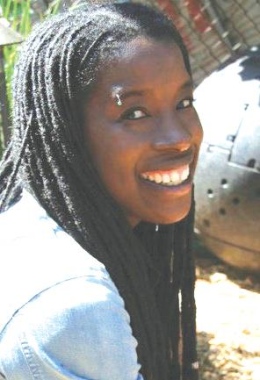 Pandora Thomas, a Youngstown State University alumna, was one of the first to complete the Green For All fellowship at Columbia University. She joined in 2008 during the project’s early stages.

The project is designed to revitalize depressed areas by teaching about green energy, helping to create jobs and restoring livelihood.

Fellows work within their neighborhoods using these tools to develop “community-generated solutions and organize for change in their cities,” according to the Green For All website.

“Green For All wanted to create this relevant movement that brought together the environment, social justice and art,” Thomas said. “And that was kind of the beginning of that.”

The project has grown all over the U.S., with more than 150 Green For All fellows working in more than 74 cities in 28 states.

“People all over the country, diverse groups of people are integrating the environment in relevant ways into their work,” Thomas said.

Thomas said Green For All could be used within Youngstown to help continue the movement, but the people of the city must take an active role to see results.

“It’s not just Green For All; it’s how to find those leaders in the system with the most innovative learning models, community engagement and education,” Thomas said. “Green For all is a good support, but not a training program.”

“Those issues need to be integrated into the green movement,” she said.

She said things as simple as backyard gardens can unite a community and give it something to protect and grow.

“Those traditions that had gardens, how do we nurture those stories? It’s about creating a movement that’s about beautifying YSU [and] beautifying Youngstown,” Thomas said.

Thomas said she believes that YSU students can help the green movement by talking and collaborating with citizens of the area, adding that these green conversations will have a positive impact on the city of Youngstown.

“Everything we do can have a green twist to it,” she said. “Every job has an environmental impact to it. YSU could help by getting other people active and thinking about this.”

Thomas said her love for the environment passed down from her parents and started at an early age when she was living in Sharon, Pa.

She said she remembers a home filled with her mother’s houseplants and a childhood characterized by fishing trips with her dad. She loved being outside and felt a deep connection with nature.

As she grew older, her love for the world around her developed, and she was eager to learn more.

Her passion took her to Germany during her senior year of high school. The time she spent abroad quickly opened her eyes to how big the world really is.

“I was like kind of getting to be an activist around my city, and I was frustrated with at first the Iraqi war,” she said. “The minute I got to Amsterdam and saw the energy of the rest of the world, I was like, ‘Oh my goodness.’”

She then went on to major in religious studies at YSU.

Thomas became invested in her major, while at the same time integrating her love for the earth and sustainability into her studies.

“What the different religions had to say about the environment, how we treat the earth like the way we treat women, like I was always kind of thinking about those things, even though there weren’t necessarily clear answers for them,” Thomas said.

During her time at YSU, her love of learning about cultures and people led her to join multiple student groups.

“I had a little overcommitment because there was so much I was trying to explore,” Thomas said. “So, through religious studies, I had a way to integrate the things I wanted to learn about the world and about myself.”

However, she felt that many of the groups she was involved in were extremely isolated.

Thomas wanted to see the various groups combine, work together and bridge the gap.

“I was that bridge,” she said.

After YSU, Thomas enrolled in a teaching program at the New College of California.

She went on to study at Columbia University and Tufts University.

Thomas is working to complete her master’s degree in urban and environmental planning at Tufts University. She resides in San Francisco, where she is working as director of the Green Career Program at Global Exchange.