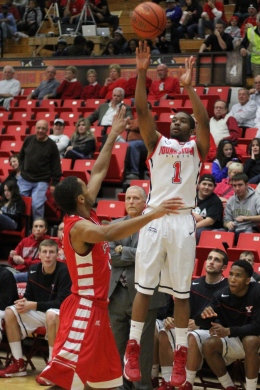 Youngstown State guard Blake Allen (1) shoots a 3-pointer while being defended by Greg Brown (12) of St. Francis during the second half Friday night at the Beeghly Center. Allen finished the game with 18 points off six 3-pointers. Dustin Livesay | The Jambar

After the fifth one, all Blake Allen could do was smile and stick out his tongue.

Allen hit five three-pointers in the second half – six in the entire game – scoring 18 points in leading the Youngstown State University men’s basketball team to a 75-60 victory against St Francis (Pa.) University in its home-opener Friday night.

“It feels pretty good, I’m not gonna lie,” Allen said about his ability to knock down the three. “It’s just a really good feeling. You feel like every one you shoot is gonna go in.”

Considering the amount of work Allen put’s in, his performance should be no surprise. Over the past two days alone, he’s put up “800 or 900” practice shots.

Allen’s behind-the-arc accuracy proved vital in the Penguins (3-0) victory, as it helped stretch a 29-24 halftime lead into a comfortable second half advantage. Shooting 60.7 percent, YSU outs cored the Red Flash 46-36 in the second half.

“He was pretty good,” he said. “He really carried us there.”

In all, the Penguins starters scored all but four of the total points. Kamren Belin and Shawn Amiker scored 11, while Damian Eargle added 12.

Slocum said the bench was a non-factor because of the matchup problems posed by the Red Flash (0-3).

“It was just a bad mismatch for guys like [Fletcher Larson] and [Bobby Hain],” he said.

And while Slocum was happy with the starter’s production, he wasn’t entirely happy with YSUs overall performance.

“I didn’t think our intensity was great tonight,” he said. “But I think we have to learn to play at home. It’s a different animal than playing on the road. I think that’s a learning process for this group.”