The Youngstown State University Marching Pride will begin its season with the Meet the Marching Pride performance at 7:30 p.m. on Saturday at Stambaugh Stadium. This free event is a chance for the public to preview the music the band will play during Penguin football games.

Band camp is an eight-day training course that concluded with Monday’s IGNITE concert. This was the first opportunity for members of the band to show how their practices at camp and summer rehearsals have paid off.

The band performed the visual aspect of their show by cleaning up their formations and slowing down the pace of their choreography.

Attendance was free and open to anyone, free-will donations to support YSU Marching Pride were accepted. 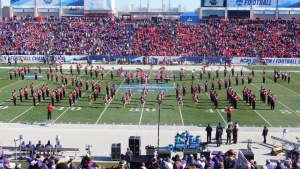 “We’re excited to host Penguin fans for Meet the Marching Pride to get a head start on the Penguin football season opening on Sept. 2,” Brandt Payne, the director of Athletic Bands, said.

The Marching Pride will perform during halftime of the season opener in Pittsburgh at Heinz Field. Their halftime show includes renditions of “Bad Romance,” “Born This Way” and “Respect.”

Payne said performing at a large venue in front a massive crowd instills a lasting confidence in the members of the band that will aid them both in the classroom and after graduation. Opportunities like this allow the Marching Pride to represent what YSU has to offer in both athletics and the performing arts.

Following a successful football season last year, Payne is looking forward to accompanying the team all the way to Dallas once again.

“The Marching Pride welcomes over 170 members to campus this fall,” Payne said.

The director is enthusiastic about his work with the marching band students, and they are proud to represent YSU both on campus and in their performances across the country.

The Office of Alumni Engagement and the Penguin Club will host a Floating Tailgate on the Gateway Clipper on the day of the season opener from 10 a.m. to 12 p.m. The event will take place on a docked boat of the Gateway Clipper Fleet before kickoff at 1 p.m. Attendees can enjoy a buffet lunch, cash bar and a dockside performance from members of the marching band.

Catherine Cala, the director of alumni engagement, said the menu at this event will include barbecue chicken, hotdogs, coleslaw, chips, brownies and more. Reservations for the floating tailgate can be made through the office of Alumni Engagement.

The price is $35 for YSU Alumni or Penguin Club members and $40 for the public. The deadline for reservation is Friday. Reservations can be made at www.ysu.edu/alumni/pitt or through calling Alumni Engagement at 330-941-3119.

Tickets for the season opening game against the Pitt Panthers are available from the YSU ticket office at 330-941-1978. Seats are in section 518 of the upper level toward the west side of the stadium.