Alexander McCullough and Kelly Stevens, better known as A.C. and Kelly In The Morning on the Cumulus Media station in Youngstown, WHOT 101.1, have been on the air for a long time.

McCullough got his start in the radio industry growing up listening to WHOT 101.1. He said when his parents bought him his first transistor radio, he used to lie under a blanket and listen to the radio at night.

McCullough said he had no idea how to get started because it was not like how it is now where schools and career days are available. However, he said the universe has been in his corner the whole way and got introduced to this field of work in the army.

“I got out and a friend of mine was working at a public radio station, and I started working with him,” McCullough said. “The job came up here, and I went up and auditioned.”

McCullough said when he was lying under his covers at night listening to the radio, he never would have imagined he would be where he is today.

Stevens said she loved music and listening to the radio when she was in high school. She said at the time, she saw someone on remote broadcast explaining how the waves traveled and was interested in radio immediately. 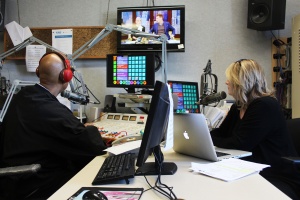 Stevens said she was hired at radio station in high school to run small things overnight and do overnight shifts.

“I couldn’t even drive yet,” Stevens said. “My mom would drive me, but I made her park up the street so they wouldn’t see that I couldn’t drive.”

Stevens said she fell in love with radio and instead of just watching the equipment overnight, she would try to do some of the things live such as the top of the hour ID to get the experience.

McCullough said for him, the music is one of the main reasons he enjoys his job. He said he likes the people and that he has been a “music nut” his entire life and has been introduced to more of it through his job.

“People who I am dear, dear friends with to this day,” McCullough said. “We go out to eat, we talk on the phone and I never would have met any of these people if it hadn’t been for this business.”

Stevens said the job is fun because music changes all the time. She said it’s always fresh and new, and she too agrees with McCullough that people play a huge part in the business.

“I’ve always been a people person,” Stevens said. “I’ve got to go out to see people’s jobs and careers and we deliver breakfast or lunch and it’s like a field trip.”

McCullough said the job he has is second nature. He said if someone has planned their show ahead of time, then there is no reason to be nervous.

“The really cool thing is, probably the reason you’d be nervous is because you’re afraid you’re going to screw up,” McCullough said. “But, what we found is, when you do screw up, people love you more.”

“Once you get your foot in the door, then there are so many different things you can do,” McCullough said. “After you get your shot, you’ll know and just run with it.”

Stevens said anything someone can do to broadcast themselves on the internet or any place else is a great way to get started in radio. She said what she and McCullough do every day is like giving a book report.

“Take every opportunity to talk to people, to be real and have fun,” Stevens said. “We don’t do negative radio, we do positive because it’s just who we are.”

Joe Dobbins, also known as JDub, the afternoon host and program director of WHOT 101.1, said McCullough and Stevens are very well received and well known. He said they are both well intertwined with the community.

“They’ve actually donated the majority of their time as hosts here for WHOT 101.1 to really get back into the community,” Dobbins said. “I think that’s very important.”