The Youngstown State University African Student Union hosted an event celebrating their African heritage, which featured several activities that showcased the many aspects of African culture and tradition on Saturday.

There was a spoken word event, drum performances, dances, a fashion show and a catered meal featuring many African dishes.

YSU students and attendees were also invited to join performers on the stage in the Chestnut Room in Kilcawley Center, where they danced to traditional African music. 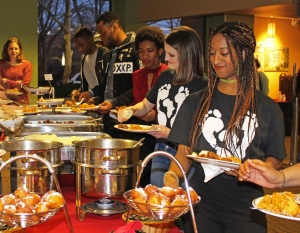 “We really wanted to showcase Africa,” said Nancy Afriyie, president of the African Student Union. “When you talk to a lot of people, they just think of Africa as a jungle and animals and stuff. [Africa] is a beautiful place, everything that you can imagine is in it.”

Afriyie said since YSU is becoming a more diverse university, they wanted to invite people to experience their African showcase.

“YSU should accept more people from other countries, like Africans,” she said.

Gelila Kebede, vice president of the African Student Union, said she was unaware of the union’s existence at first. She said since being exposed to the student group, she is now more open minded and included in the campus environment.

She said there is a need to be aware and respectful of the diverse student community at YSU.

Kebede said she wants to encourage students of all racial and ethnic background to join the African Student Union.

She said the group is not just for African students and hopes to see greater diversity within the group.

Rebecca Banks, a graduate student and active member of the group, said she was involved as an undergraduate at YSU.

She said through her participation in the organization and events showcasing African culture, her idea and perspective of Africa has changed.

“[I used to think] Africa is full of beautiful, green, wild, open spaces … a lot of natural beauties … different kind of animals,” she said. “After I was educated a little bit, I now see a lot of family values [in their culture] and [they have] big cities,” she said.

Banks also said she was not aware of the beauty and diversity in Africa at first and has even learned about the different kind of fabrics that Africans use. 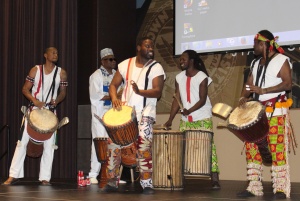 “Some people such as myself haven’t seen a lot of the beauty of Africa. We were only shown certain things on TV,” she said.

Banks said she appreciates being able to experience aspects of the various cultures through events hosted at YSU.

Banks said she now has a number of friends from Africa.

“YSU had opened up the world for me,” she said.