Jeff Stewart, coordinator of the Immigrant Worker Project, teamed up with researchers to discover the number of immigrants in Ohio in 1998. Studies estimated that there was a population of about 15,000 to 18,000 immigrants.

After finding more rural and farm-working immigrants, Stewart and the researchers found the actual number was 63,500 to 70,300, and he began working towards making them aware of the services his organization provides. 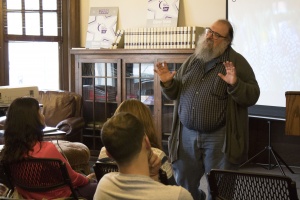 Stewart spoke about how IWP, a nonprofit based in Canton, advocates for the workplace rights of immigrants at Fok Hall on April 3. He said the organization has seen over three workers die on the job, and countless others abused.

“One of the dairy farms where it was really bad, they were charging guys for being injured,” Stewart said. “This was [a] place where there was a lot of abuses, a lot of stuff happening where we really stepped in and started working.”

Aside from handling workplace rights complaints, IWP also teaches leadership skills, English and economic literacy. There are also programs for children who are coming to the United States alone to escape the violence in their home country, Stewart said.

“Naturally we’ve seen this over hundreds of years of immigration patterns in the United States,” Stewart said. “People gravitate to where they can replicate their community.”

Alicia Prieto Langarica, a YSU math professor who attended the event, said non-immigrants don’t understand how bad conditions are in those countries.

“They know what they are coming to and this is what is at the big, beautiful end of the journey,” Prieto Langarica said. “Can you even imagine what it’s like there for mothers to say, ‘Yes, I am going to send my 14-year-old boy alone?’”

Stewart said this is a question that leaves many people on the fence.

Georgia Kasamias, a YSU student who organized the event, said she interns at IWP every Saturday.

“I realized that not many people in the Youngstown area know … of how many undocumented immigrants live and work in Ohio,” Kasamias said. “I think understanding the situation is going to ultimately be the thing that’s going to reverse or prevent xenophobia.”