Actor and political campaigner Sean Astin approached the Youngstown State University campus fountain to chants of “Rudy, Rudy, Rudy.” He answered the chants by reciting the famous speech former Notre Dame coach Knute Rockne gave in 1928 – as he had in the film.

Astin, of “Goonies,” “Rudy” and “The Lord of the Rings” trilogy fame, visited YSU to campaign for democratic presidential candidate Hillary Clinton and to register voters.

“Being in Ohio in the fall during a presidential election, for a guy who’s a political junkie,” Astin said. “I feel like it’s a rite of passage.” 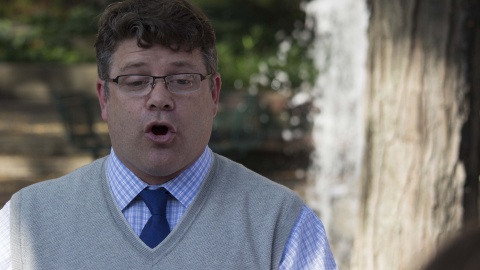 Astin’s devotion to the nominee started when he spoke at a political conference in Boulder, Colorado to a crowd of 15,000 during her husband Bill’s presidential campaign in 1992, while she was first lady of Arkansas.

He said the experience was electrifying.

Since then, the actor has been pro-Clinton, also campaigning for her during the 2008 election. Most of his speech went into greater detail about his feelings toward the nominee and vouched for her experience.

The YSU College Democrats made rounds at the fountain, asking attendees whether they’re registered to vote, and if they’d like to volunteer for Clinton’s campaign. Astin is headed to Pennsylvania to continue campaigning for Clinton.

“Universities are a space that encourages this type of activity,” he said. “You don’t know whether people that you see in a university setting are going to agree with you or not, but you know that the ethos is to respect that people are expressing themselves.”

After speaking, Astin answered questions from the crowd, many of which dealt with his acting career. He indulged his fans and recited the speech his character Samwise Gamgee gave to Frodo Baggins in “Lord of the Rings: The Two Towers.”

Math education major Jacquelyn Chapman, wearing a “Lord of the Rings” shirt and the ring around her neck, expressed a great deal of excitement about meeting an actor from her favorite movies.

“Politics is something that’s really important to me. I don’t necessarily agree with everything they say, and I’m sorry, I just need to say that,” Chapman said. “But it was just really special to hear him and his beliefs on politics.” 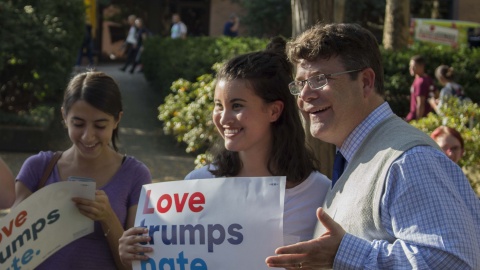 “Some of the things about Hillary’s speeches and how electrifying they were kind of got to me,” Bowser said. “That she’s a great public speaker and might be able to help the country out more than Donald Trump.”