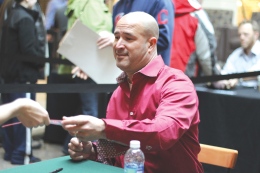 Cleveland Indians manager Manny Acta signs autographs for fans at the Summit Mall in Akron on Saturday. Acta is in his third season managing the Indians and went 80-82 last season. Photo by Dustin Livesay/The Jambar.

The Cleveland Indians began the 2011 season with little hope of making any impact in Major League Baseball.

Many predicted them to finish as one of the worst teams in baseball, including Tony Bosma of the Grand Central Sports website, who said they would be fourth in the American League Central Division.

But, through May, the Indians’ 30-15 record was the best in their division.

“Baseball’s a tough game, and if it was that easy to predict, I wouldn’t be working for a living. I would be in Vegas making lots of money,” said Indians fan John Adams.

Adams has attended Indians games with his drum since the Aug. 24, 1973, game at Cleveland Municipal Stadium. On April 27, he attended his 3,000th career game, a number that doesn’t include those without a drum.

Adams was part of the Tribe on Tour bus that visited the Summit Mall in Akron on Saturday with manager Manny Acta, players such as Jason Donald and Vinnie Pestano, and broadcasters.

Since last year’s All-Star break, the Indians began to fade, and the Detroit Tigers won the division title. The Indians finished 80-82, well for second in the Central.

The attendance increased from 2010 to 2011 with 5,546 more fans, the highest in baseball last year. The Tribe’s season was full of new memories, Adams said, including the return of Jim Thome.

When designated hitter Travis Hafner went down with a strained right foot, Thome was acquired off waivers from the Minnesota Twins on Aug. 26.

Thome, a member of the 600-home run club, hit .296 with three home runs and 10 RBIs in 22 games with the Indians in 2011. This offseason, the Philadelphia Phillies signed him as a free agent. This is Thome’s second stint with the Phillies.

When Thome returned, Adams said many fans were thinking about the “glory days” of Indians baseball.

“That’s the excitement; that’s the electricity when everybody in the park is sharing something,” Adams said. “They all have different memories, but they’re all these baseball memories, and that is when you can feel the energy.”

As for last season, Adams said the Tribe “left nothing on the field.”

“I try to tell people, ‘Remember, half of this team was in the minor leagues the year before or that year,'” Adams said. “What made it special is they gave everything that they had, and they were focused on every game.”

Adams added that he saw a lot of potential in the Indians that may correlate with the upcoming 2012 season.

“If you can’t stay healthy, it’s going to be tough to win, and I think especially for teams like the Indians,” Hamilton said. “The margin for error isn’t as great, so those injuries last year were really devastating.”

Players such as Grady Sizemore, Michael Brantley and Jason Kipnis caught the injury bug at one point or another.

“I know it’s an excuse that a lot of teams make, but they truly were hurt badly by injuries,” said broadcaster Jim Rosenhaus. “In some seasons you can overcome that, but for some reason the Indians could not last year.”

The Indians had seven players on the 60-day disabled list along with multiple 15-day and day-to-day injuries.

One of the players was pitcher Alex White, a former first-round pick by the Indians in 2009. Fans got a chance to see White during the early months of last season before he went down with right middle finger soreness.

White was traded to the Colorado Rockies on July 30 for Ubaldo Jimenez, who finished last year with a 4.68 ERA, 10 wins and 180 strikeouts. He finished with a 5.10 ERA and 62 strikeouts in 11 starts with the Indians.

Jimenez is slated to be the Indians’ 2012 Opening Day starter.

“I think it’s just him trying to get adjusted to Cleveland,” said starting pitcher Josh Tomlin.

Jimenez and Tomlin will be in the starting rotation before the season begins. Justin Masterson and new addition Derek Lowe will also be in the mix.

Lowe heads into the 2012 season after one of his worst seasons. He finished with a 5.05 ERA, his highest since 2004, and 17 losses with the Atlanta Braves.

Hamilton said he’s curious about what Lowe has left in his 39-year-old arm.

“He did not have a good year last year with Atlanta, and I think he’s pitching in a much tougher league than the National League,” Hamilton said.

While the Indians have four starters ready to go, they are looking for somebody to fill the fifth spot in light of the Fausto Carmona scandal. He was arrested on Jan. 20 in the Dominican Republic.

They accused Carmona of using a false identity to try to obtain a U.S. visa. Carmona’s real name is Roberto Hernandez Heredia, and he is 31 years old. The Indians’ roster had Carmona born on Dec. 7, 1983, making him 28 years old.

Heredia left jail on bail, but he is not allowed to return to the Indians until further notice.

The Indians recently traded for veteran right-hander Kevin Slowey from the Rockies. He finished last season with a 6.67 ERA, the highest in his career, and a 0-8 record in 59.1 innings pitched with the Twins.

“I think Kevin Slowey, because of what he’s done in the past, would be the favorite, but he had a bad year last year, so it will be interesting to see if he can bounce back,” Hamilton said.

Rosenhaus said Slowey and Lowe could chew up some innings.

“You need to replace some innings there, and Derek Lowe certainly will,” Rosenhaus said. “Kevin Slowey has the potential to. It will be interesting to see what happens to that fifth spot in the rotation.”

Rosenhaus added that first base is probably the biggest position to fill. Matt LaPorta was the team’s starter throughout most of last season, but underachieved. He batted .247 with 11 homeruns and 53 RBIs in 107 games.

“First base is a big question mark because you’re just not sure about the progress of Matt LaPorta,” Rosenhaus said. “I think between now and the start of the season, I still believe we’re going to see an acquisition, a fairly substantial acquisition, to fill that spot.”

Free agents still on the market include Derek Lee and Casey Kotchman. Carlos Pena returned to the Tampa Bay Rays, Albert Pujols signed with the Los Angeles Angels of Anaheim and Prince Fielder signed with the Tigers.

Hamilton and Rosenhaus said they would also keep their eyes on the outfield. Brantley, Sizemore and Shin-Soo Choo are scheduled to be the starters, but were all injured last season.

“I think a lot of it is you did have those growing pains from some of the younger players that were brought up to replace some of the injured players,” Rosenhaus said.

The Indians picked up Fred Lewis and Felix Pie to add depth to the outfield roster with Duncan and Ezequiel Carrera.