After successfully defending the Ice Castle, the Youngstown State University football team (3-1, 1-0 Missouri Valley Football Conference) hits the road to take on the University of South Dakota (4-0, 1-0) in the DakotaDome in Vermillion, SD.

Youngstown State secured a monumental conference win as it knocked off South Dakota State University (3-1) in a 19-7 win.

After taking over at QB for starter Hunter Wells, who went down with an injury early on, Nathan Mays helped secure the win with great play. With a career high 183 rushing yards, Tevin McCaster pounded in the go-ahead touchdown run to help lead Youngstown State to victory.

Youngstown State will be heading into yet another Top 10 matchup as it faces off against USD this week. South Dakota has been one of the more talked about teams coming into this week’s game as the Coyotes have outscored teams 73 to 3 in the first quarter while boasting 132-22 in the first half.

But for Rader the rankings, whether Top 5 or Top 10, are just a side note. 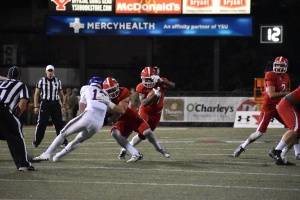 “I hear about them, especially with social media nowadays but I don’t try to focus on it because once you get caught up on all that you’re gonna get your mind out of the game of football and you won’t be able to focus on how you play,” Rader said.

Defensive tackle Savon Smith would agree with Rader, who also talked about the preparation for USD.

“We don’t focus on USD, we focus on ourselves, the fundamentals and the little things, are what’s gonna win us the game,” Smith said. “Those are the things we do every week.

Despite having a 5-0 series advantage over USD including a 30-20 win over them last year, YSU Head Coach Bo Pelini doesn’t take the threat this team brings lightly, citing SDU dual-threat quarterback Chris Streveler as a concern.

“Anytime you have a quarterback that can run the ball like a tailback, it presents extra challenges for your defense,” Pelini said. “A lot of guys have to be on alert as far as handling the responsibilities that go with that.”

Despite the loss of key members on last year’s defense, which included now NFL players Avery Moss and Derek Rivers, the Penguins’ D has been rock solid to start.

Through four games, Youngstown State has only allowed six touchdowns while amassing 10 sacks. This followed last year’s 49-sack effort throughout the season.

“When you play the kind of schedule we have, it’s got to come together quick. I think we’re doing some good things,” Pelini said. “It’s not quite up to where we want or need it to be down the road but it’s a good start. Our kids are working hard.”

Smith also spoke toward what he expects out of the defense and the team moving forward.

“I knew coming into this year our team would be just as good, if not better than last year,” Smith said. “I think we have a really good shot at going back to Frisco, winning conference, and actually winning the National Championship.”

Getting back there won’t be easy facing a tough schedule of high ranked teams, a feat that doesn’t come as much of a shock to Pelini.

“Our kids understand what’s ahead of them, they’ve been through the league before and they understand the challenges that come with it,” Pelini said. “That’s why you come to play at YSU or this conference because you’re gonna get challenged week to week, it’s a great challenge, hopefully as a competitor, team you embrace it.”

Youngstown State will clash in the dome with South Dakota this Saturday, Oct. 7 at 3:00PM.