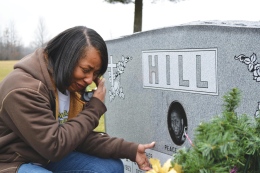 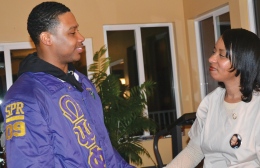 Every day since her son’s death, Shirlene Hill drives past Jamail Johnson’s grave on her way to work. She greets him in the morning and says goodnight to him as she drives home.

Hill lost her son a year ago, but the brothers of Omega Psi Phi have tried to fill the gap since.

“They are awesome men. That’s all I know. Jamail is gone, and I know he is in heaven with my father,” she said. “But he left me with five other sons that I truly call my sons.”

A year after the off-campus shooting, Johnson’s mother has not lost sight of what Omega Psi Phi represents.

“The brotherhood, the togetherness, the love. These young men that he crossed over with, they haven’t missed a beat,” Hill said.

Hill added that the brothers have been there every step of the way.

“When it first happened, they were at the door. I can recall them sitting around me, talking to me, consoling me,” she said. “It’s unbelievable how much they have done for me. It’s hard, but they made this journey easier for me.”

She expressed her gratitude for all of the kind gestures she received from the young men.

“I turned 50. … They were there for me and took me to dinner,” she said. “Within the past month, I get flowers every Sunday.”

Hill was once skeptical of the stereotype associated with fraternities, but her son’s dedication changed her perspective.

“In the beginning, I was one of those mothers where fraternities to me made me really reluctant, and I was scared, and didn’t want Jamail to be a part,” she said. “But Jamail made up his mind that this is what he wanted to do. And I can truly say, it’s broadened my horizon to know fraternities are good.”

Hill said she has nothing but positive things to say about Omega Psi Phi and the rest of YSU Greek life.

“If I had to put a price on it, there would be no price. All of the fraternities and sororities at YSU have come together in love and you can’t put a price on that,” Hill said. “This has made them closer.”

She said the fraternity completed Johnson, and he was proud to be a part of it.

Hill and her husband, Sidney, agreed that the brothers can stop by anytime.

“I’ve always been that mother that, no matter what, they can call me. I don’t care if it’s 2 or 3 o’clock in the morning, and I’ll be there,” she said.

Hill added that all of the things the brothers once stood for still stand even after the tragedy.

Steve Lemley, a YSU graduate and member of the Zeta Gamma chapter of Omega Psi Phi when the incident occurred, often stops over the house to visit Johnson’s family.

“We’re here for you,” he said to Hill when visiting the home Thursday evening.

“If it wasn’t for you guys, I don’t know where I’d be. I love you so much, Steve. I love all of you guys. You’re my son,” Hill said to Lemley as they embraced.

Lemley, 26, remembers Johnson as a brother, friend and peacemaker.

“What can you not say about Jamail?” he said. “He brought me in and introduced me to his family, and when I couldn’t make it home for the holidays, I was spending time with them. They welcomed me in with open arms.”

Lemley said Johnson was constantly laughing and was full of life. He recalled his favorite memories with Johnson.

“There was never a dull, down moment with him. Never. Ever. We would sit up most nights and just laugh about everything under the sun,” he said. “He snored so loud all the time. He said it was because of his allergies. That’s one of my favorite memories of him.”

Lemley graduated in the spring and said he misses his dear friend and appreciates all of the things Johnson did for the community and his family.

“I just love him to death. But Mother Hill, she lost one but gained five more,” he said. “And all we can do is be here as much as we can for his family. It’s hard, you know.”

This year, Lemley and the other brothers struggle to recruit new members and rid their fraternity of its party-throwing reputation. He said the chapter is slowly coming back together.

Mother Hill has met a couple of young men and plays a large role in choosing new members.

“It’s a process right now because you’re always looking for the best, being a part of an organization,” Lemley said. “But the gentleman we’ve been bringing around Mother Hill … she really sees a little Jamail in all of them.”

Lemley said the brothers used Johnson’s death as a crutch for a while.

“But if he were here he would say we still have to keep going, keep pushing. Don’t just stop. Keep persevering through any trial and tribulations,” he said.

Yet, tenacity still proves difficult for the brotherhood.

“Everyone looks at us as just these partiers, but all six of us got our degrees,” Lemley said. “That says a lot right there.”

“We want to show the campus and city that’s not just what we’re all about. We’re always looked at just heavy through everything. All eyes are on us 24/7,” Lemley said. “But were going to handle it the right way.”

YSU’s Omega Psi Phi members plan to continue educational presentations and community work in the hope of reflecting the kind of person Johnson was.

As for Johnson’s family, friends and brothers, the reflection is love and thanks.

“I love you, man. Thank you for introducing me to the family and thank you for being the man that you’ve become … and quit snoring,” Lemley said.