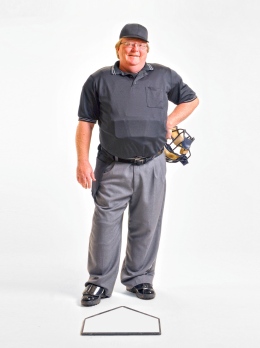 “I told Gary Williams [of my decision],” Cooper said. “He asked me to apply just one more year.”

Williams is the district administrator of Little League umpires in Columbiana, Mahoning and Trumbull counties.

“I figured, give it one more shot and see what happens,” Williams said.

Luckily for Cooper, the seventh time was the charm.

“Lo and behold, I got a letter in early January,” Cooper said.

The letter told Cooper that he was selected to umpire the 2012 LLWS.

He said he is excited for the opportunity, which he’d always considered “a dream.”

“It wasn’t something I set my heart on,” Cooper said. “I always thought it would be icing on the cake.”

Umpiring since 1994 at the local level and then at the state tournament, Cooper was selected for the 2005 Little League Central Regional tournament in Indianapolis.

“I ended up being the home plate umpire for the Midwest championship game on ESPN,” Cooper said. “Once you made it to the regional, they evaluate you out there. Then you have to apply to the next level, which is the World Series.”

Although it took seven years, Cooper said he is happy his skills were finally noticed.

“I’m nowhere near being the best umpire around, but I do work hard at it, and I’m pretty consistent at what I do,” Cooper said. “Something about my skills are the best among those that are eligible for the LLWS.”

Cooper has come a long way since umpiring his first game. Chosen from the stands as a fill-in umpire for his 11-year-old son’s game, he wanted only to escape the other parents’ negativity. However, once he stepped onto the field, Cooper realized his passion for umpiring.

“I went out there, got away from those parents, and I suddenly realized I liked it,” he said.

Cooper will leave for Williamsport, Pa., on Aug. 15. He will umpire at least one game each day of the LLWS, which will continue through Aug. 26. All of the games will be televised on ESPN or ABC.

“The big stage doesn’t worry me,” Cooper said. “The biggest challenge is trying to keep up the pace of the game because ESPN slows the games down.”

After the LLWS, Cooper said he will continue to umpire games in northeast Ohio. In addition to Little League, he umpires high school baseball, summer baseball and old-timers leagues.

Cooper said he wants to be the same umpire in Williamsport that he is in northeast Ohio.

“I just have to be myself out there and not even think that there’s cameras and everybody watching,” he said.

Cooper added that he’s looking forward to “having fun and stepping onto a baseball field that’s hard to match anywhere else.”

First, though, Cooper said he wants to make sure he is not being fooled.

“I’m still in shock,” he said. “I keep reading the letter, looking for the fine print that says this is a joke.”