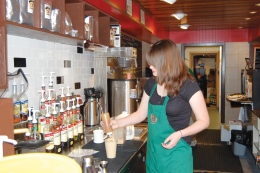 Barista Kaley Costello makes a frozen mocha at Joe Maxx Coffee in downtown Youngstown. The coffee shop has increased revenue and clientele since opening in the fall. Photo by Christopher Kochera/The Jambar.

Upon entering Joe Maxx Coffee, the distinct aroma of freshly ground coffee and the sound of barista-operated machines fill the air.

Less noticeable is the risk of starting a new business in a turbulent economy.

“The business plan of Joe Maxx Coffee was to put coffee cafes in underserved neighborhoods that could support a coffee shop that had either been overlooked or big chains weren’t interested in going into,” proprietor Mike Avey said.

Avey tested the waters by opening a coffee shop in Girard in April 2011. The success of the shop gave him the confidence to open Joe Maxx Coffee in Youngstown.

“I saw a need for building a coffee cafe, and I figured the best way to get to know people from outside the area was to go into the center, because so many people come into town for the day to work or go to school,” he said.

The cafe, located on the first floor of the Realty Building on East Federal Street, opened in November. Since then, the business has experienced an increase in customers and revenue.

Avey is no stranger to the risks and rewards of entrepreneurship.

After a work-related accident forced him to retire from his job as an emergency medical technician/firefighter in 1999, Avey started several small businesses, including a gold and diamond business.

“The whole idea of entrepreneurship has become a passion of mine,” Avey said. “The enjoyment of taking an idea from conception to watching it develop and giving benefit back to the community has been a very big highlight to my entrepreneurship thus far.”

“Starting any small business, the numbers are stacked against you,” he said. “You always wonder when you unlock the door and turn on the open sign whether the community is going to support you. It takes a lot of confidence in your business plan to really feel comfortable.”

Avey said the help of several friends, including manager Jennifer Wilkinson, has added to the success of Joe Maxx Coffee.

“When you have a new business, it’s all about learning,” said Wilkinson, a Youngstown native. “Starting the business has been absolutely incredible.”

Wilkinson previously worked as a regional trainer for a national chain, and worked to help other independent coffee shops.

“I’ve been doing this for many years. I really think we’re going to be OK,” she said.

While preparing a frozen beverage for a customer, barista Kaley Costello said that she enjoys working at Joe Maxx Coffee.

“It’s been a blast,” Costello said. “I like getting to know such a mix of customers, from lawyers to students.”

Avey said he plans to expand his business in the future.

“We have several new cafe target locations picked out,” he said.

“We plan to expand the brand as fast as we can, but also maintain the balance between growth and brand quality.”