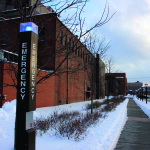 John Beshara, chief of police for the YSU PD, was supportive of the new system.

“The new provider will be more expedient and beneficial to students signing up,” Beshara said. “You can also add up to two additional phone numbers.”

“Everything we have is for the convenience and protection of students,” Beshara said.

The chief mentioned that the current crime rate at YSU is low and that the hard work of their department in coordination with student cooperation has helped keep it that way.

The new system has improved reliability, which has been an issue with previous providers. Beshara encourages students to sign up for the texting, but also to share alerts via social media.

Despite multiple emails being sent out by Ron Cole over the past few weeks, some students are still unaware of the changes.

Bryce Saunders, a political science student, was just made aware of the program.

“I heard very little of it, but now since I’m aware of it, I’m going to sign up,” Saunders said.

Saunders said the previous program was beneficial, allow students to receive information that would keep them safe.

Social media plays a huge role in how the police contact students or vice versa. Their website contains multiple ways to reach out and share information, as well as the ability to see crime statistics for campus. The department is also active on Twitter.

Other methods have been less effective. The university put call boxes outside of Williamson Hall that directly link students to the 911 call center and campus policy, but Beshara said the rate of use is near zero, perhaps because of YSU’s low crime rates.

Beshara said they are trying to stay up-to-date with current modes of communication.

“I think in the age we live in, we are always searching for a cutting edge way to help keep students aware and safe,” Beshara said.

Mahmoud Yacoub, a psychology student, was concerned about the advertisement methods YSU had chosen.

“I like the current system,” Yacoub said. “So I am certain the new Penguin Alert system will be great, but perhaps they could advertise on the main page or somewhere everyone is going to get a glimpse of the new system.”

Savannah Bowman, a combined science major, was happy with the alert system and its advertisement.

“I feel that YSU’s mass alert system has been very helpful,” Bowman said. “I mean, I got emails, texts and I knew not to go out yesterday in the extreme weather because of it.”