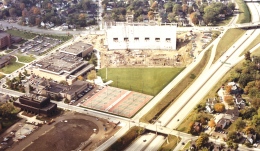 The preliminary construction phase what of would end up as Stambaugh Stadium in 1982. File photo courtesy of Maag Library.

Arnold D. Stambaugh Stadium has been the home of the Youngstown State University football team since 1982.

“Before Stambaugh, YSU had to play at local high schools like Campbell, Fitch and Rayen,” Malmisur said. “It was especially difficult for opposing teams because they never knew where they would end up playing until the day of the game.”

Also referred to as the Ice Castle, Stambaugh Stadium is located on the highest part of YSU’s campus and is the tallest building in Youngstown.

“It’s the first thing you see when you’re coming into town,” he said. “It’s the skyline for the city of Youngstown.”

Malmisur praised members of the university community for making the stadium a reality. “The erection of Stambaugh speaks well of the leadership of that time,” he said.

Originally, Stambaugh Stadium’s seating capacity was around 17,000. However, after a 1997 renovation, stands were added on the east end; this renovation added approximately 3,000 seats, bringing the stadium’s capacity to 20,630.

“It gave YSU and big-time high schools a place to play, and brought a new excitement to football fans,” he said. “It also affected many high schools, prompting them to make improvements to their own facilities.”

Throughout the first 29 seasons at the Ice Castle, YSU has fallen short of a .500 record only four times.

Along with the seating additions, a number of upgrades to the Ice Castle have taken place over the years.

In 2000, a sound system was added to the east and west ends of the stadium, while in 2004, a new 17-by-12.5 Mitsubishi Diamond Vision scoreboard was installed.

Also, in 2009, $250,000 went toward replacement of the stadium’s seats, and the turf was replaced last year for the third time in the stadium’s history.