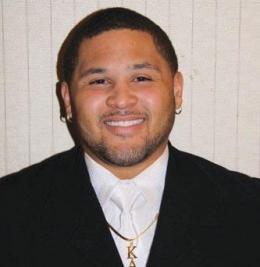 Eight individuals involved with the hazing that led to the hospitalization of Youngstown State University student ReSean Yancey were each charged with two counts of felonious assault on Wednesday.

“[Yancey] was hospitalized for serious injuries sustained over being hazed multiple times to join the Kappa Alpha Psi fraternity,” read a statement released by the Youngstown Police Department.

Of the eight charged, only one, Trey McCune, 21, is a YSU student.

The other seven are former YSU students and Kappa Alpha Psi members.

After further investigation, Breylon Stubbs, 22, also came forward as a victim of hazing with the same fraternity, reports say. Police Chief Rod Foley said he believes there could be others.

“We know of one other victim,” Foley said. “Maybe the stigma attached to being a victim [is preventing him from coming forward].”

The investigation is ongoing, but other subjects could be charged related to the hazing incidents, the release read.

Foley encouraged anyone subject to that treatment to alert the police.

“It’s not just one punch; these were beatings over a prolonged period,” Foley said. “I’m astonished after a couple weeks they still wanted to be part of that.”

The suspects have been notified by the city’s police department and instructed to turn themselves in to the Mahoning County Jail for booking.

“[The other Greek organizations] need to still realize, I think they do, that this was totally unacceptable behavior,” Anderson said.

Fahey said he was angry, sad and outraged on behalf of the family.

“Honestly, I thought that it couldn’t be our students, our alumni,” Fahey said about his initial reaction. “I don’t think it reflects YSU students or alumni. These men apparently are criminals.”

On Feb. 2, after what police estimate to be four to six weeks of beatings, members of Kappa Alpha Psi allegedly hospitalized Yancey, where he relied on a ventilator to survive.

The Jambar questioned McCune about the alleged hazing on Feb. 6. McCune denied any such activity at his fraternity, which is now under investigation by police.

He did admit to knowing of the incident the morning after Yancey’s hospitalization.

“My adviser called me [Feb. 3] and told me [Yancey] was in the hospital and asked if it had anything to do with a fraternity thing. I was like, ‘No, I have no idea what’s going on,'” McCune said.

The Jambar initially broke the story in the Feb. 7 issue.

“Based on the fraternity’s rules and regulations, it is therefor necessary to place the Beta Pi chapter in an inactive status,” the order said. “Until this issue can be resolved, [YSU’s chapter] is hereby ordered to cease and desist any and all chapter functions until further notice by me.”

The report indicated discipline would follow any action by the organization on or off campus.

While the statement said the international organization was conducting its own internal investigation, Hunt declined to further elaborate on Wednesday.

Anderson took action on Feb. 9, when she suspended the fraternity from the university.

“[YSU] is in the process of conducting an internal university investigation that could lead to the permanent revocation of the chapter’s charter on the YSU campus,” a statement issued Wednesday said.